Traveling Back in Time and Loving the View: The Cloisters and Fort Tryon Park

One of the greatest things about New York is that the subways can turn into time machines–if you know where to go–seemingly whisking you away to an entirely different era. Easily accessible by public transportation, the Cloisters and Fort Tryon Park are a beautiful and serene part of the city where visitors can stroll through real medieval halls, view the pristine Hudson River as seen by the first European explorers and experience an unparalleled escape from the chaos of the city. 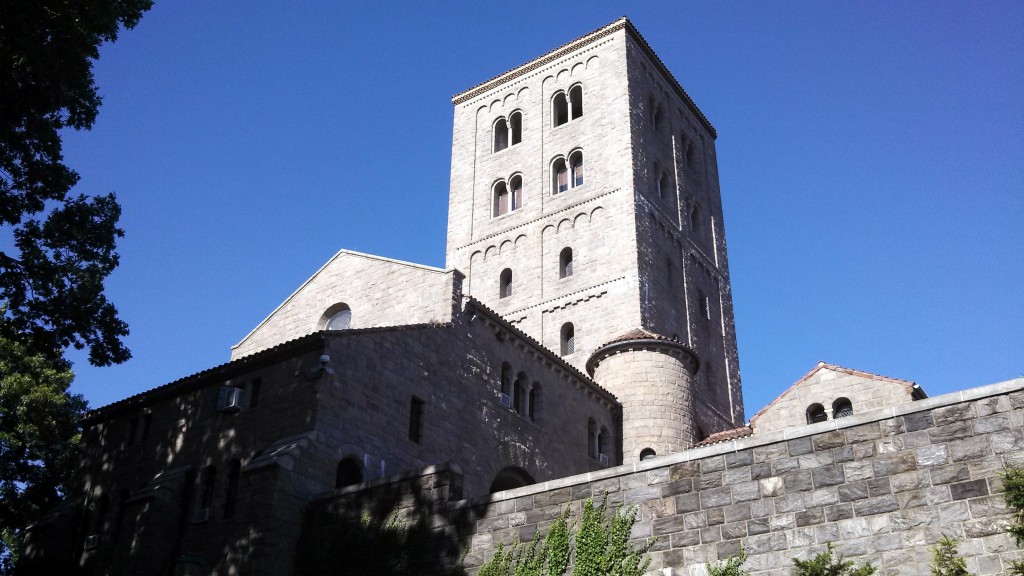 The Cloisters – a slice of Europe in Upper Manhattan 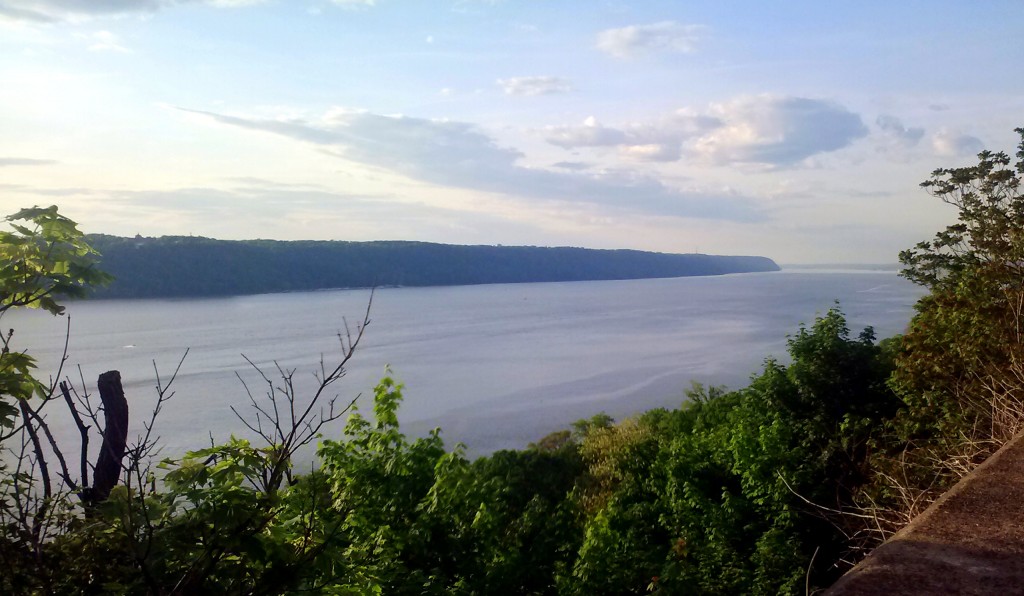 Located in the upper Manhattan neighborhood of Inwood, the Cloisters houses the vast medieval art collection of the Metropolitan Museum of Art.  On display are extravagant tapestries, priceless stained glass windows and intricate stone carvings–flourishes that once adorned the walls of monks, knights and nobles.  The building itself is made up of stones from five different European abbeys which were partially disassembled in the 1930s.  Piece-by-piece, the structures were shipped to New York to be rebuilt and combined into a single building. 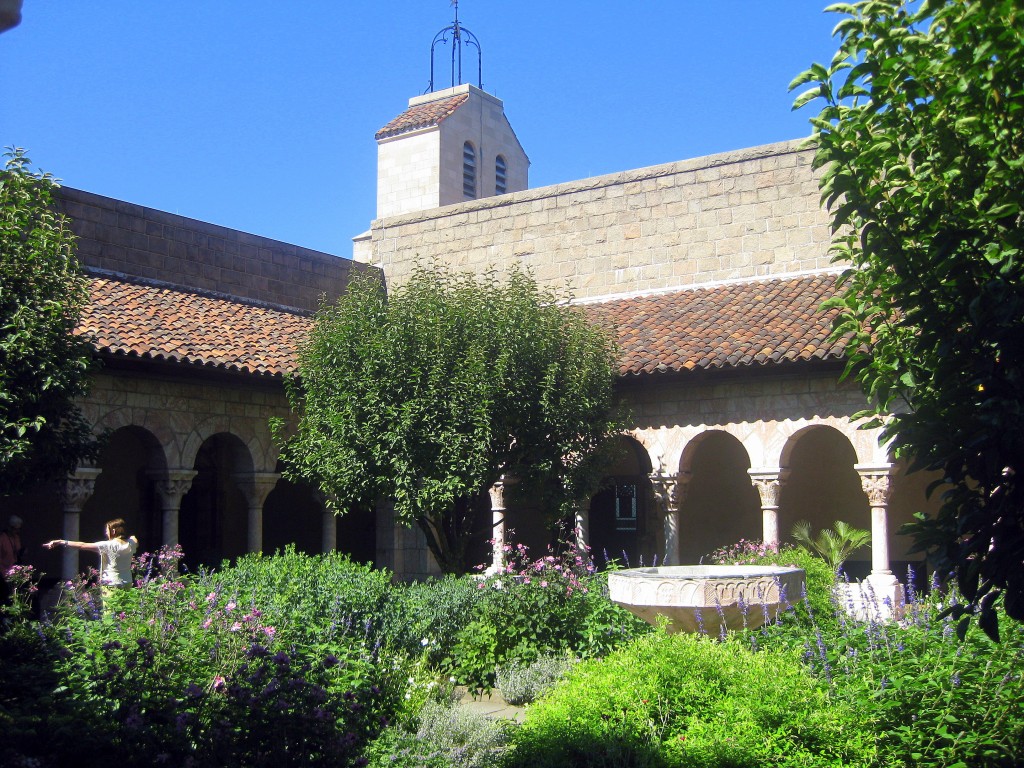 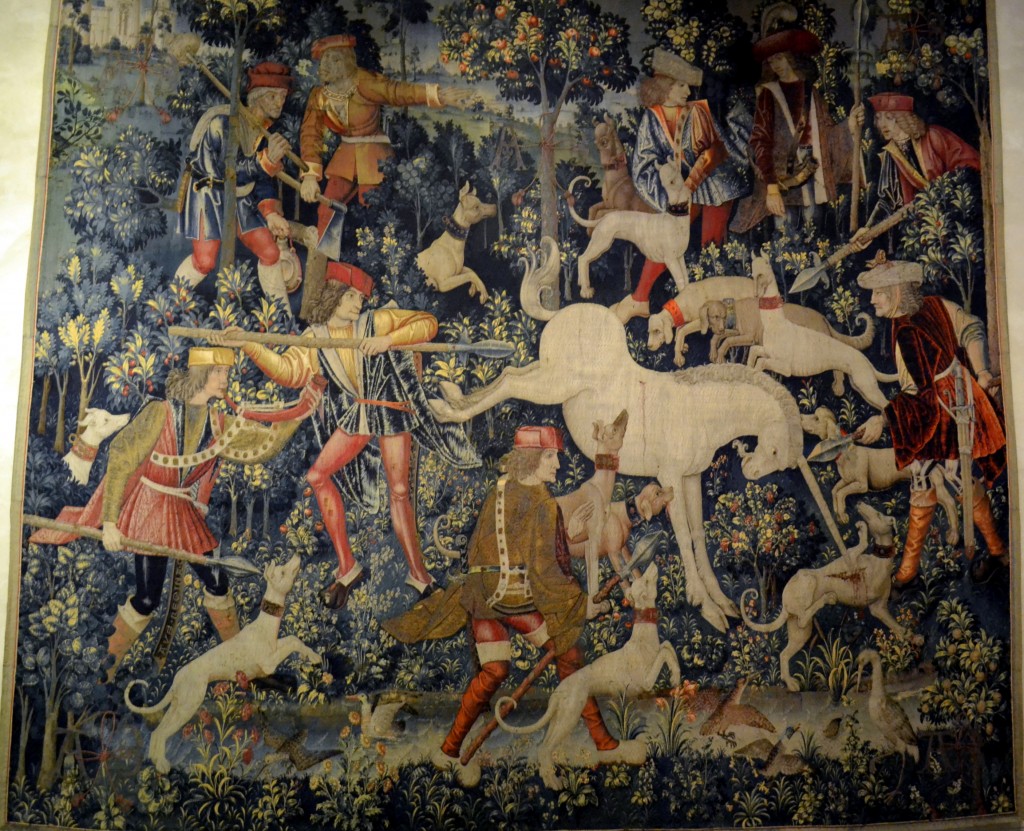 The Unicorn Defends Itself: In classic fashion, the humans in this tapestry find a unicorn and decide they need to kill it and take it home 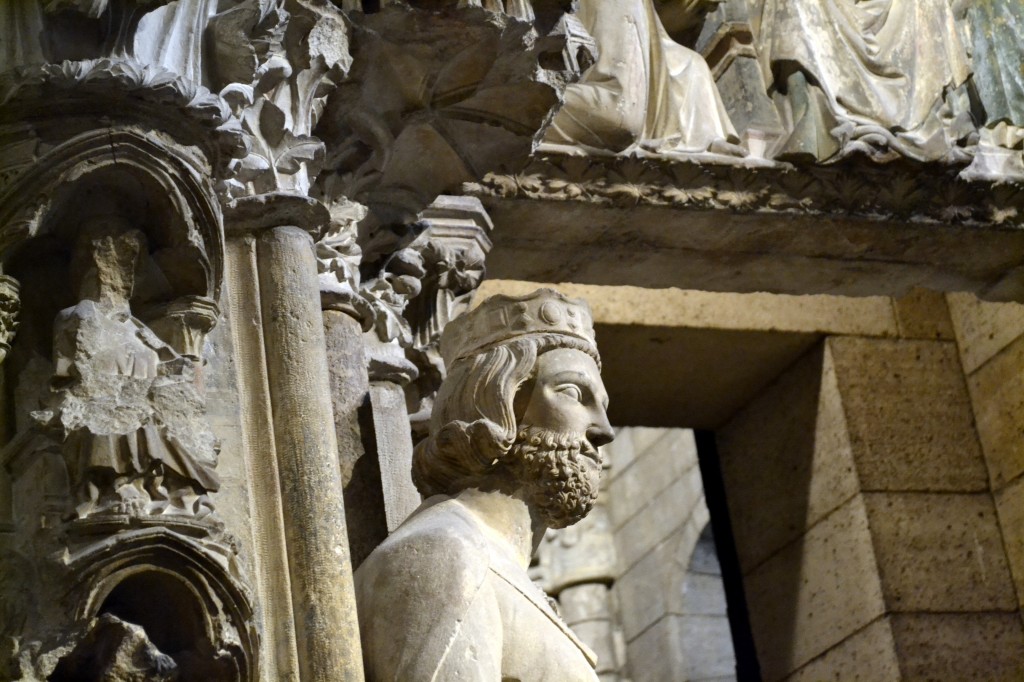 Old sentinels in a new home

Fort Tryon Park, which surrounds the museum, stands on land donated by John D. Rockefeller Jr. The park was beautifully landscaped by the the sons of Central Park architect Fredrick Law Olmsted and offers magnificent views of the Hudson River, the George Washington Bridge, and the New Jersey Palisades, also purchased and preserved by Rockefeller. 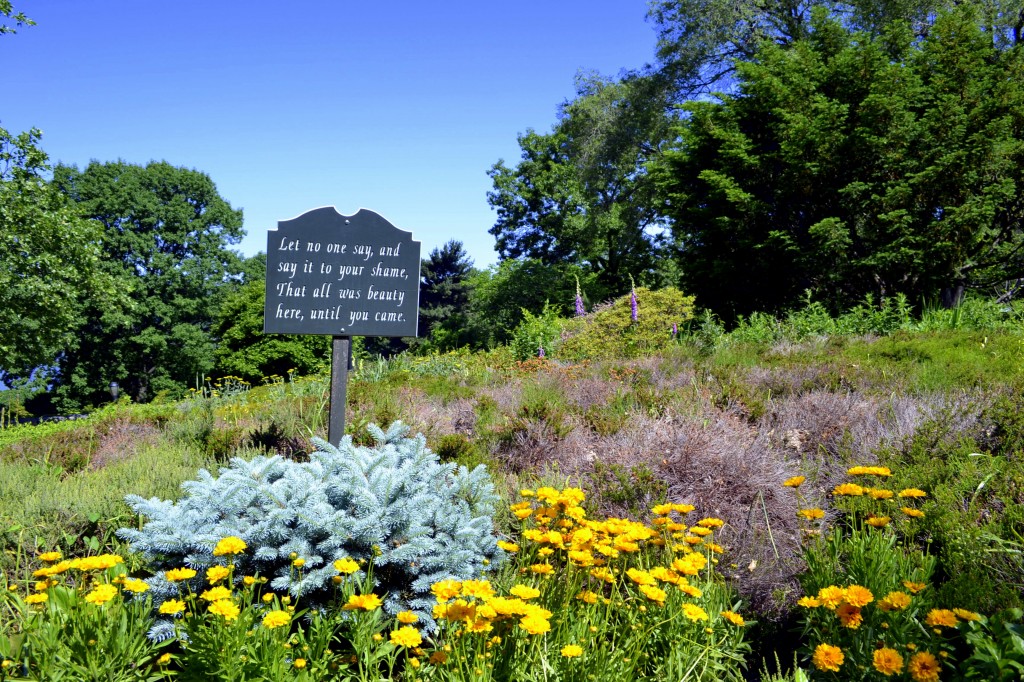 The Heather Garden is part of the original Olmsted Brothers design for the park. 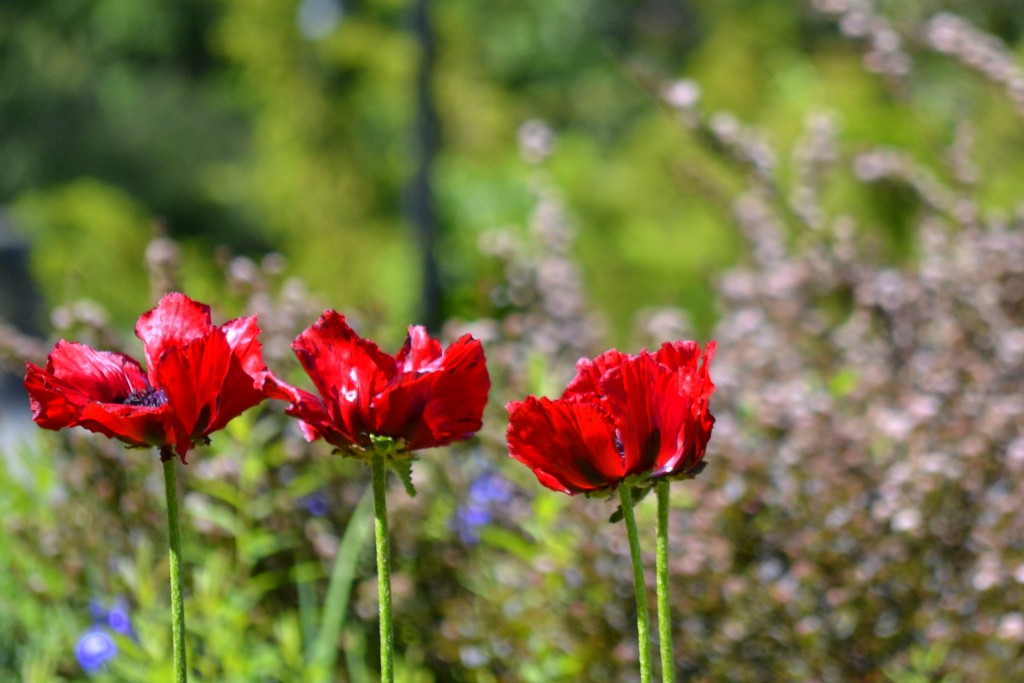 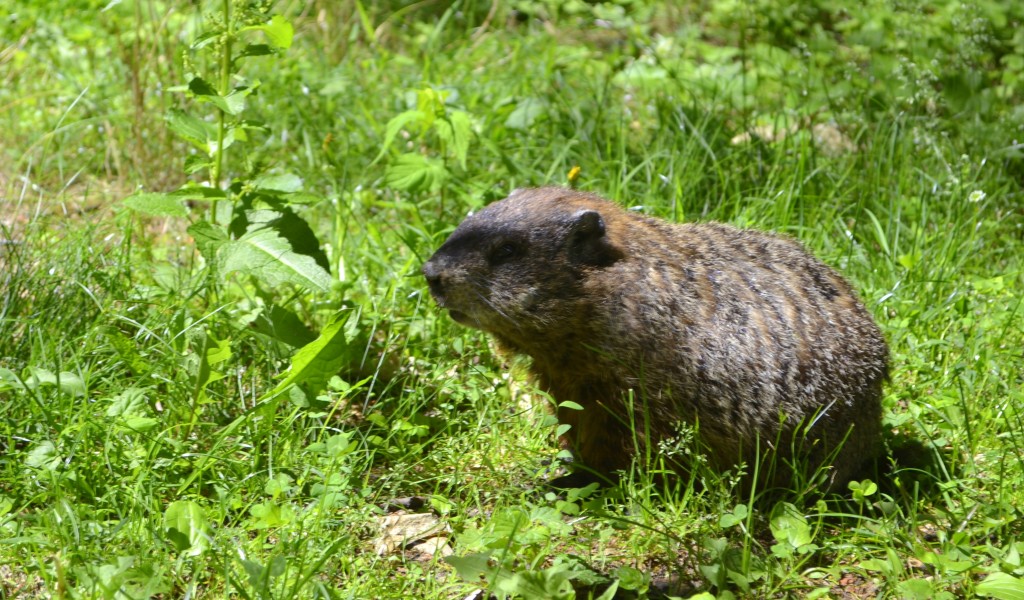 With luck, you might see a rare sight, a real New York groundhog!

Whether you’re a New York native or a visitor don’t miss this chance to go back in time…take the A train up to Fort Tryon Park and the Cloisters!

Joni Mitchell wrote : “Don’t it always seem to go / That you don’t know what you’ve got till it’s gone / They paved paradise and put up a parking lot.”  Well in this case, they’re tearing down paradise to put up a 1,000 unit high-rise.  And paradise is located in Long Island City, Queens.  Click on any photo to enlarge. 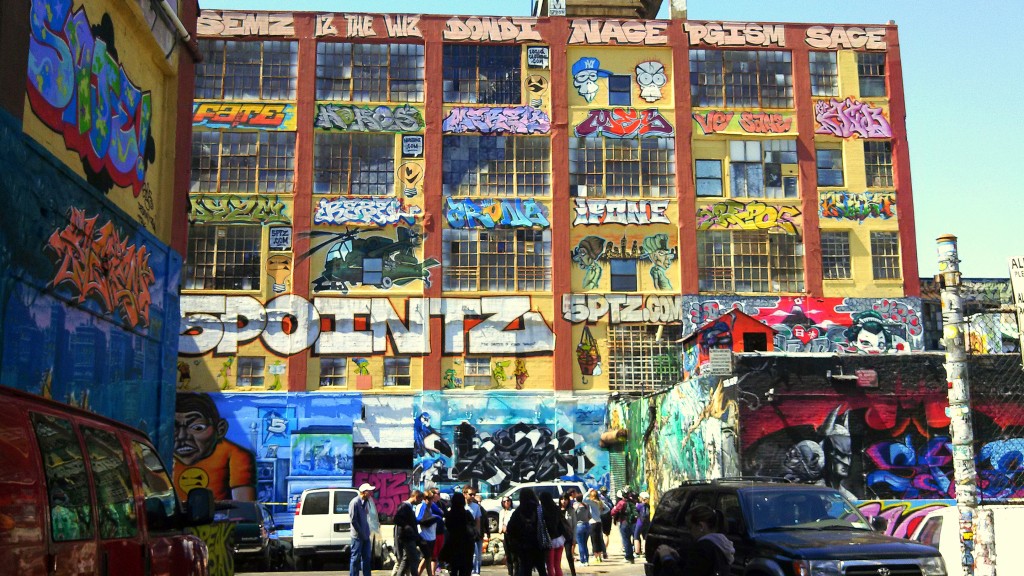 Bordering a Long Island Railroad rail yard and partially shadowed by the elevated subway tracks is 5Pointz, a collection of warehouses that would seem nondescript, were the facades not covered entirely in spectacular murals.  This breathtaking display is the result of an ongoing collaboration with over 100 artists who come from far and wide to leave their mark on New York’s most famous graffiti destination. 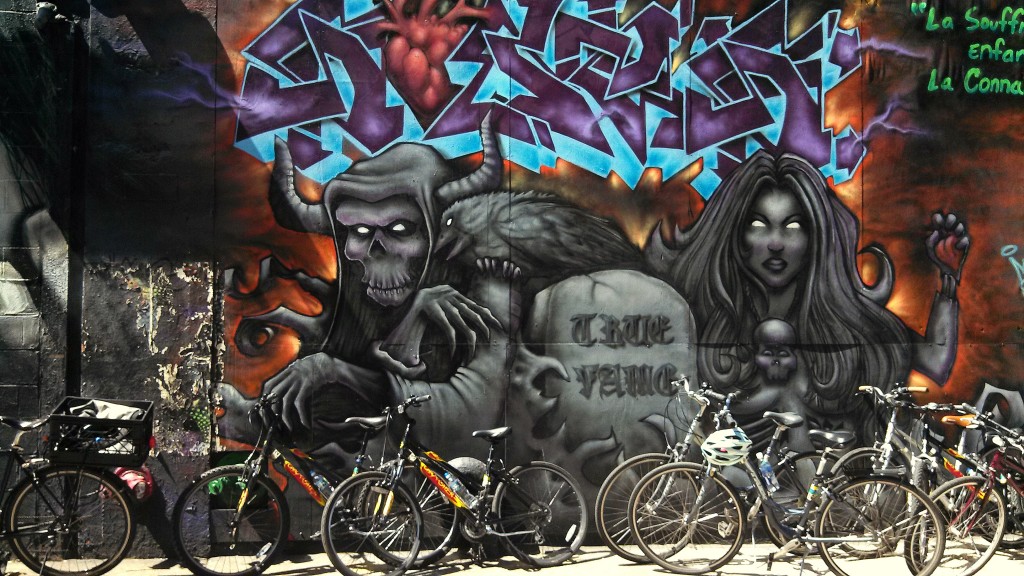 Tourists too, flock to 5Pointz. On my bike tours, I have watched the delight of countless visitors as they unexpectedly find themselves in the middle of a colossal outdoor art gallery. 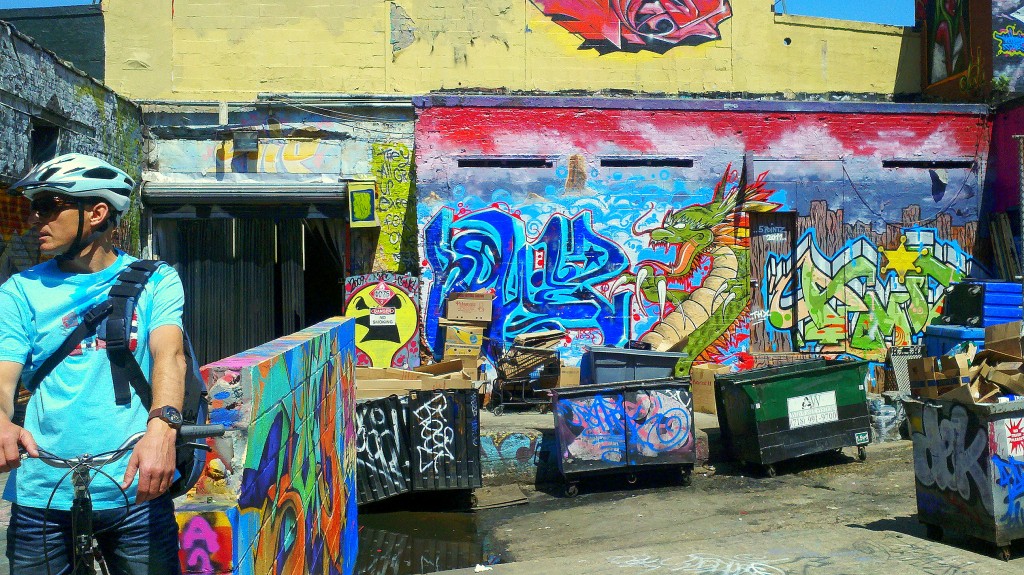 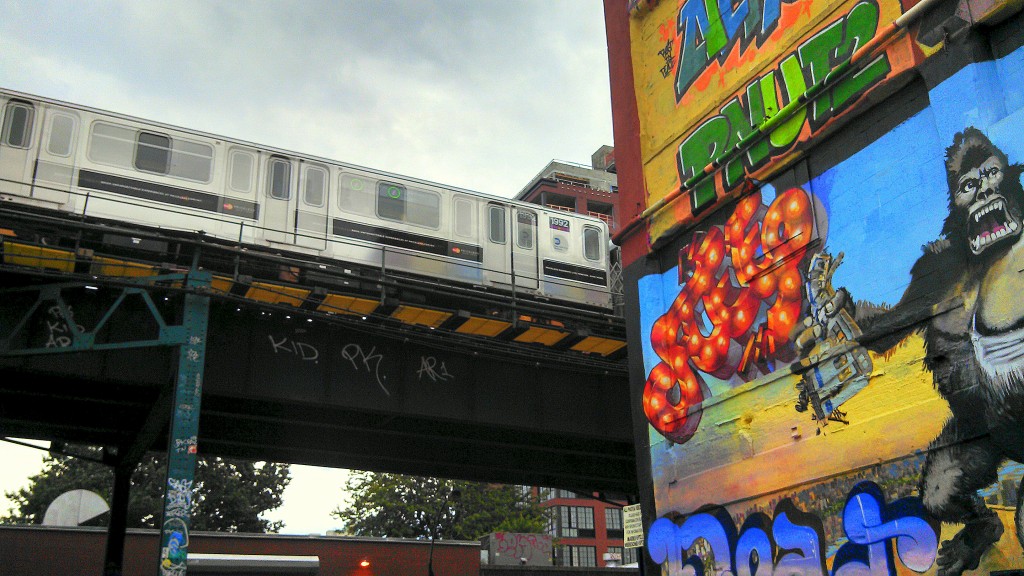 Part of the appeal of the site is its visibility–riders on the 7 train get an excellent bird’s-eye view of the complex. Mets fans on their way to Citi Field know to look out for 5Pointz soon after exiting the tunnel from Manhattan. 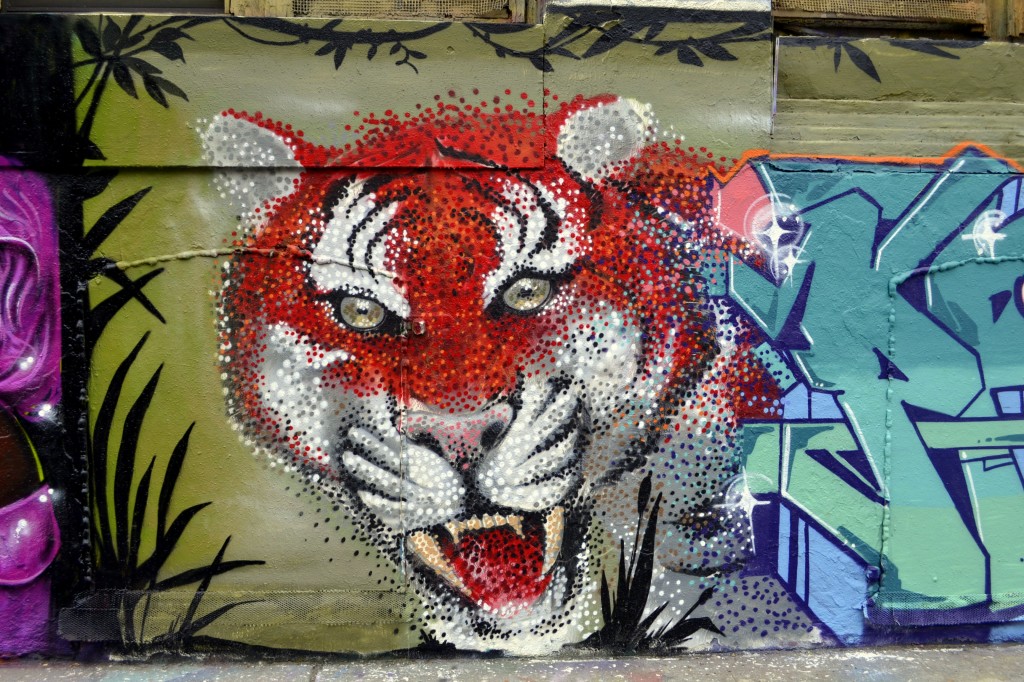 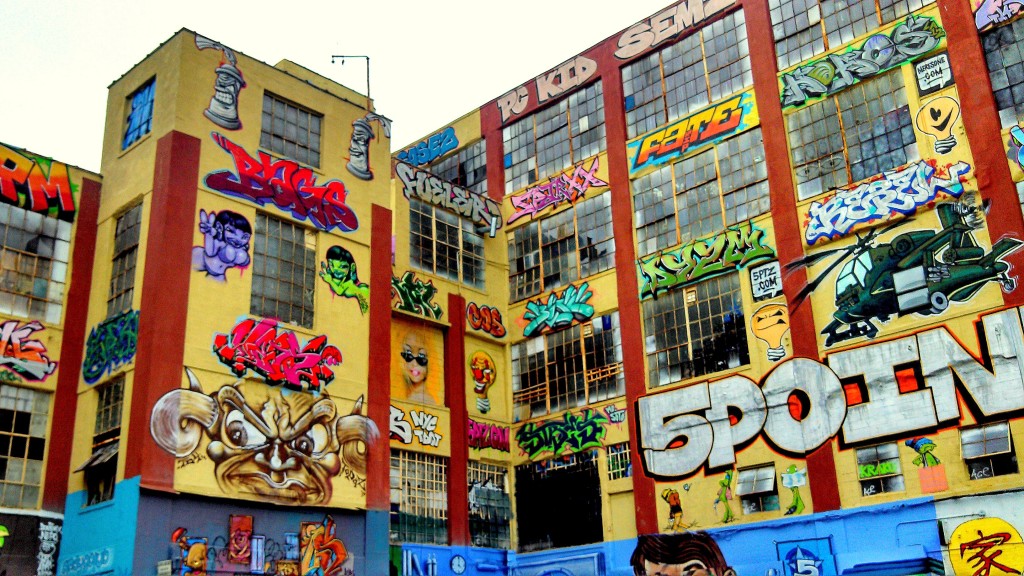 5Points is located directly across the street from PS1, the contemporary art and outdoor concert venue of the Museum of Modern Art. The presence of both have contributed to Long Island City’s rapidly rising trendiness and real estate values.

Artists contact the curator, MeresOne, well in advance before painting at 5Pointz. A friend of mine is a muralist in Ecuador and she planned an entire trip to New York around an invitation to paint here. 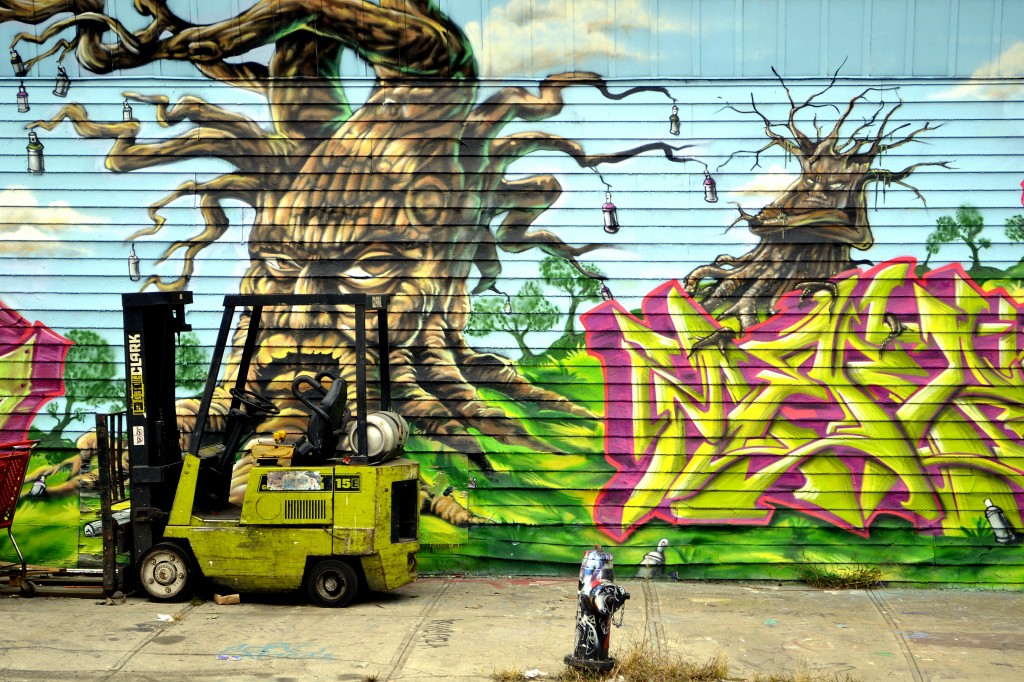 Each time I go with a bike group, the art at the ground-level has changed 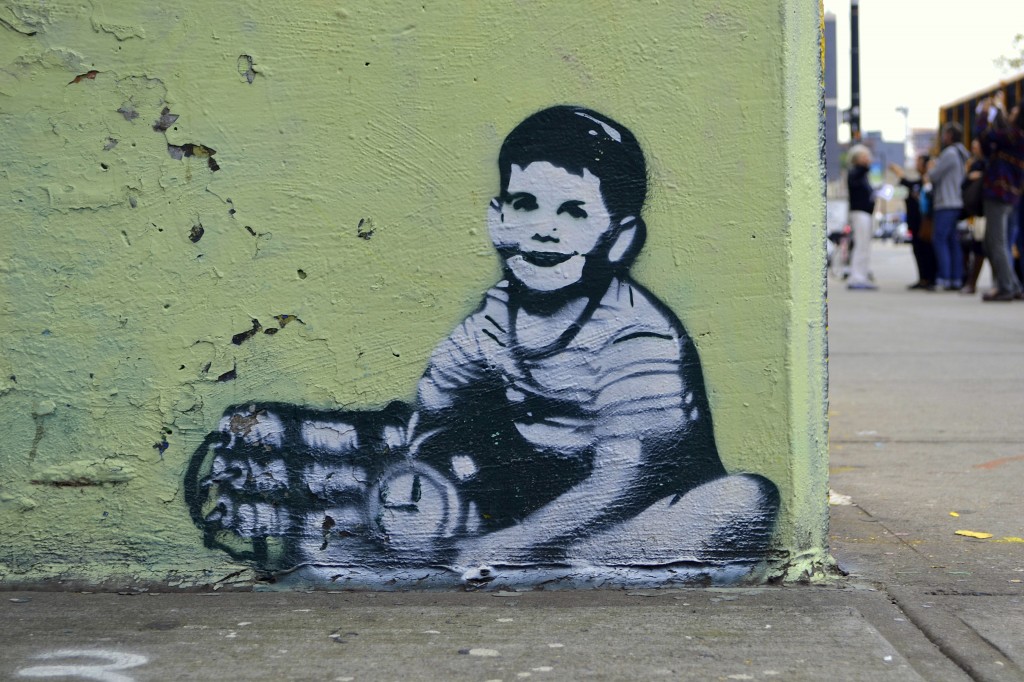 This obscure piece resembles the work of Banksy, the world’s most famous street artist…is it his?

For over a decade the art community and the owners of the property have peacefully coexisted, the result of an agreement allowing free and legal painting to take place on the facade.  However, with the Long Island City real estate market booming, the owners have decided it is high-time to demolish the site in favor of luxury condos.  The City Council quickly gave the projects two thumbs up, eager to bring in construction jobs, a public park and 210 affordable units.

To their credit, the developers have offered up 10,000 square feet of surfaces for artists to graffiti on the new construction.  But this is miniscule compared to the space they use right now.  And whether the community and its curator even want to be part of the new project is a different question.  As of right now, the defenders of 5Pointz are on their last stand.  If their final round of litigation fails, the historic warehouses will see the wrecking ball in a matter of weeks.  Joni Mitchell might be the first to say: “I told you so.” 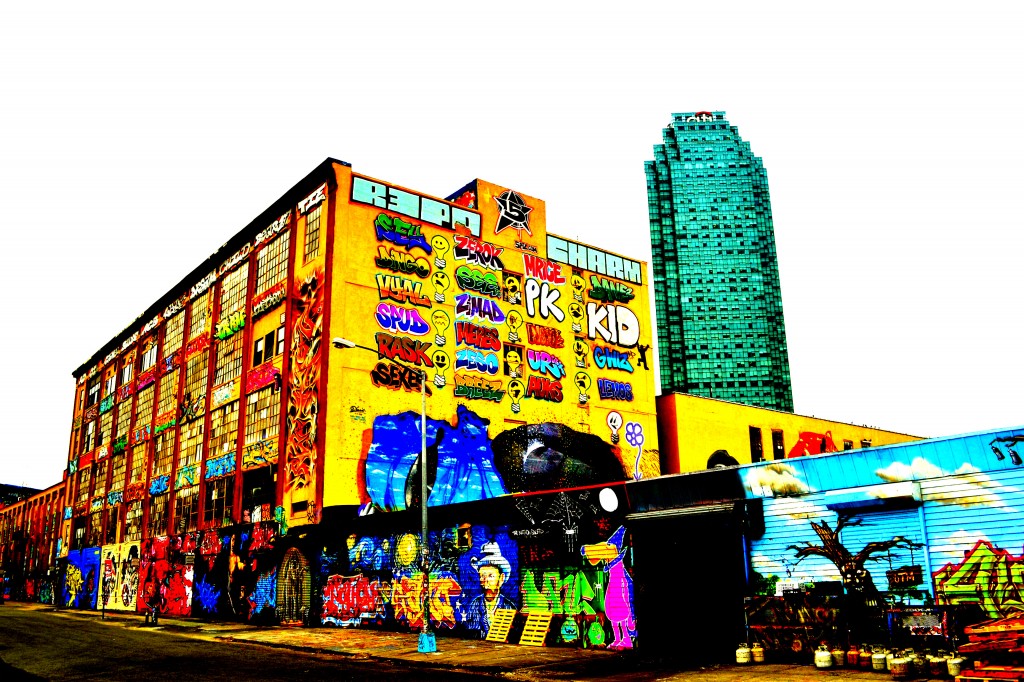 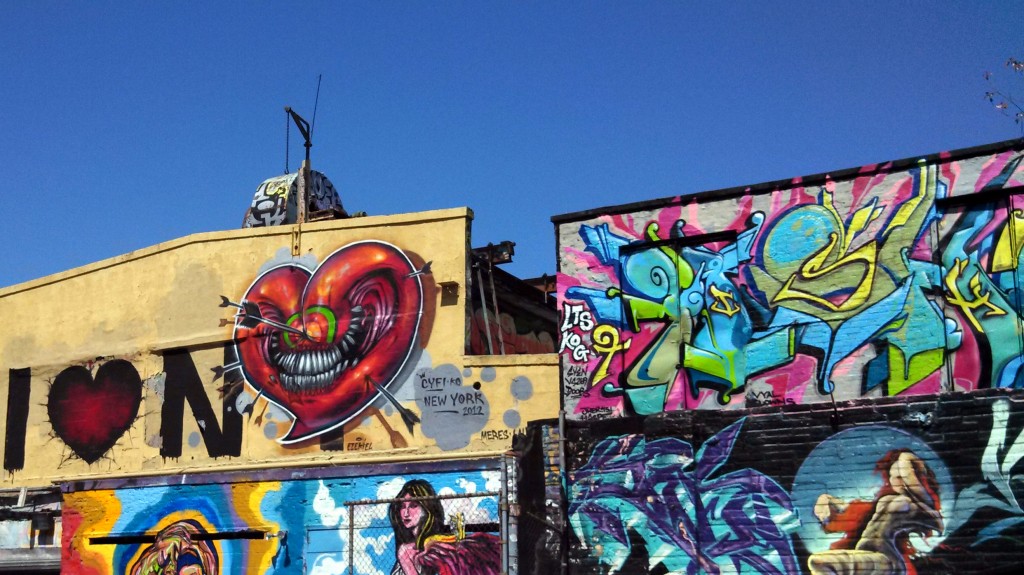 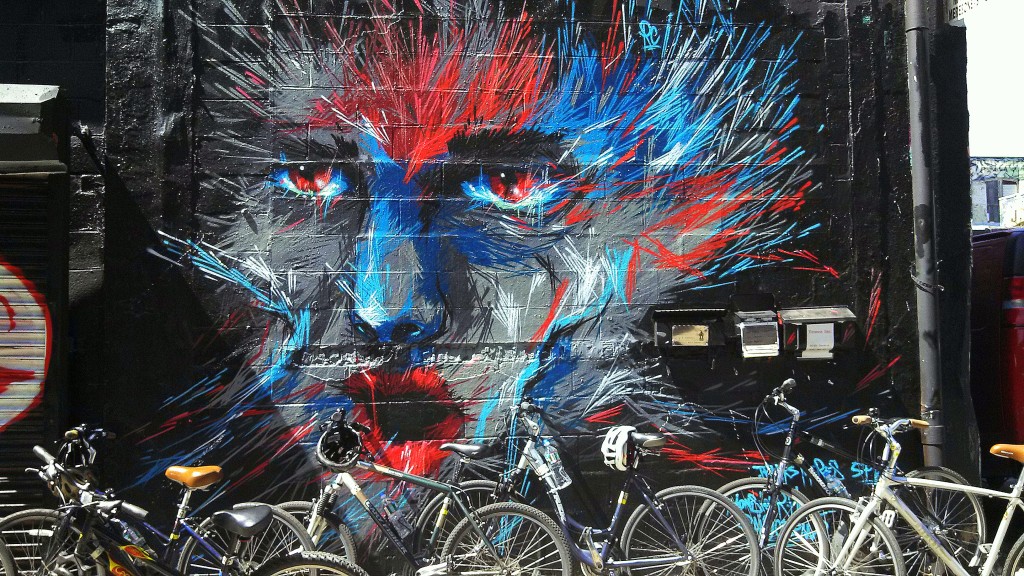 Knowing that its days might be numbered, I took my family to 5Pointz recently. “Let’s take a photo,” my Dad said. “It’s now or never”

I have visited many famous places of worship in New York but I feel confident saying that none took my breath away like the Eldridge Street Synagogue.  Regardless of your religious background, this synagogue and museum is well worth a visit for its beauty and the chance to step into a time capsule of American immigrant history.  But due to its only recent restoration and revival, this Lower East Side gem is just beginning to gain notoriety from tourists and locals alike. 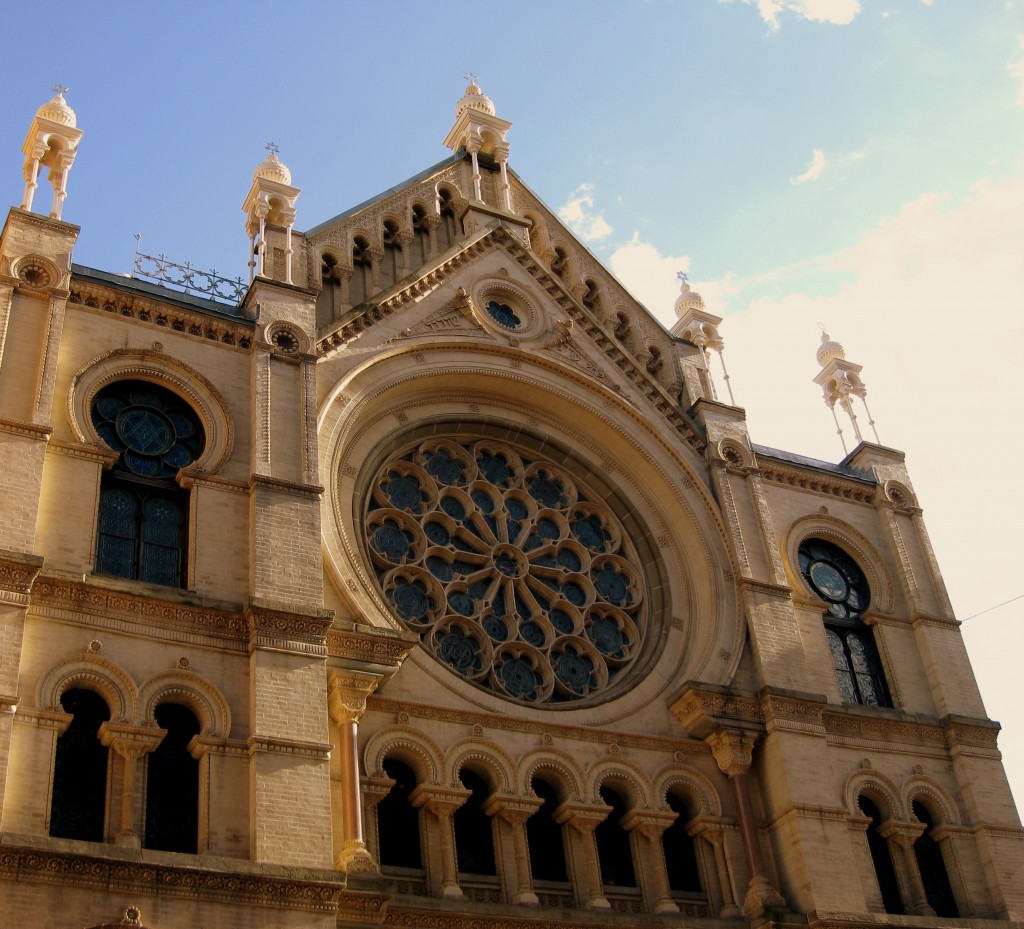 The Façade of the Eldridge Street Synagogue on Eldridge St. between Division and Canal

Completed 1887, this was the first synagogue in America built by an Eastern European Jewish congregation.  At this time, the Lower East side was a repository for hundreds of thousands of immigrants arriving each year to the New World.  German Jews were the first to arrive en masse in the mid-19th century. But due to cultural similarities and a relatively high level of education, their assimilation was rapid and they gradually progressed uptown.  The Eastern European Jews, however, arriving from the early 1880s on, came from more rural, impoverished backgrounds.   By 1900, over 50% of the immigrants arriving in America were Jews from countries such as Russia, Poland, and modern Lithuania, Ukraine, and Belarus. 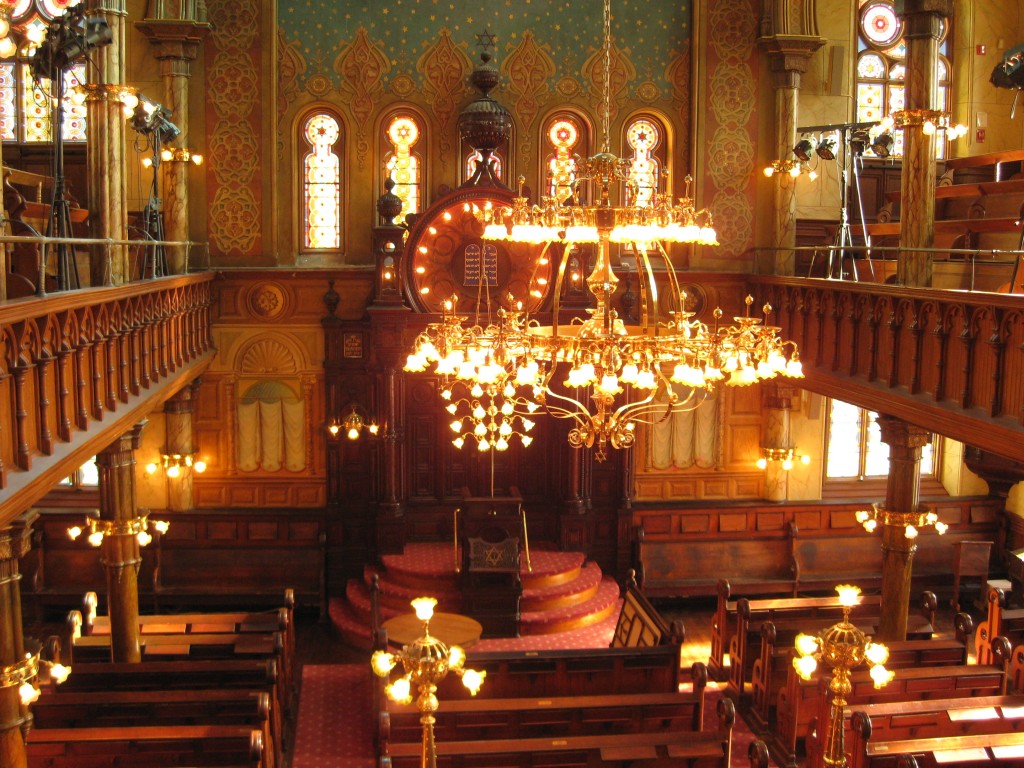 In contrast to the dismal tenements and sweatshops of the Lower East Side, the Eldridge Street Synagogue boasted lavish decorations, stained glass and vaulted ceilings.  Its worshipers represented a mixture of socio-economic backgrounds and its services on high holidays drew such crowds that policemen kept order on the streets outside. 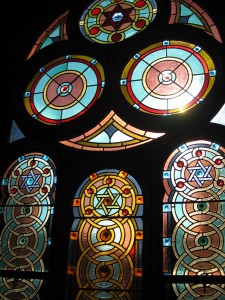 Original leaded stained glass with Stars of David inside the synagogue

However, the Great Depression and changing demographics in the Lower East Side saw a dwindling congregation at Eldridge Street.  Furthermore, the Immigration Act of 1924 specifically excluded Eastern Europeans by using the 1890 census as the basis for entrance quotas, essentially making Jewish immigration impossible.  In the 30s, unable to pay the bills and maintain the building, the main sanctuary was closed off and the congregation began holding services in the unheated basement. 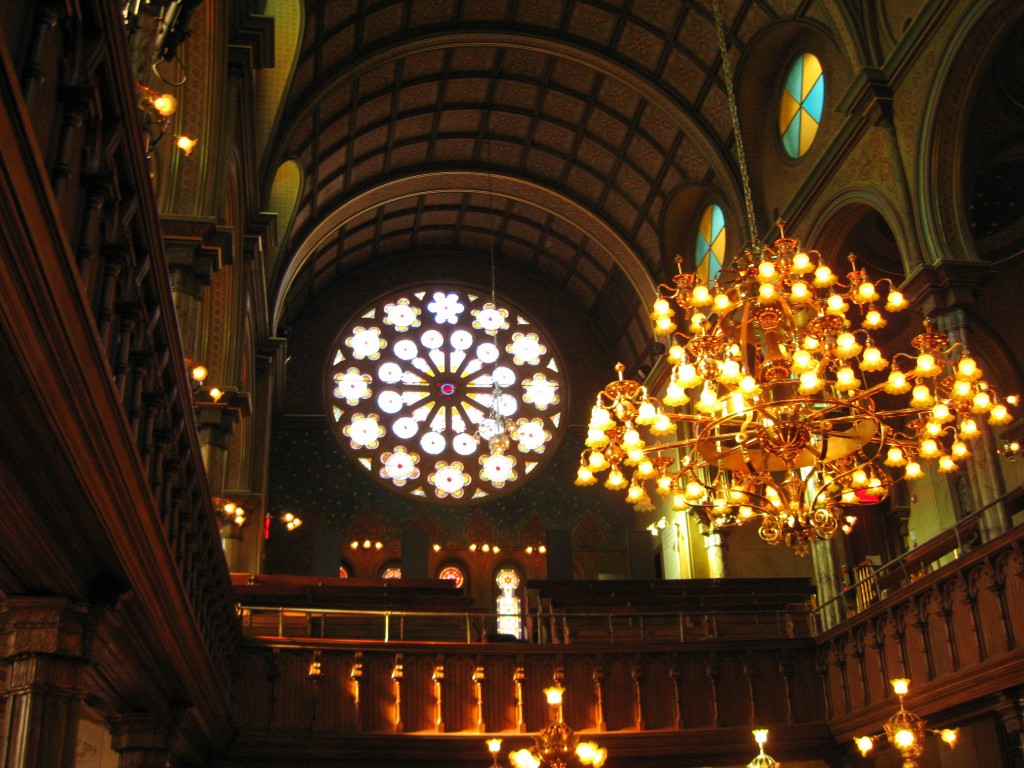 Luckily, in the mid-80s, the synagogue was saved from disrepair.  The sanctuary was rediscovered and a non-profit organization was established to raise money for a restoration.  Part of the west roof had caved in and pigeons were roosting throughout the synagogue.  A 20-year, $18.5 million renovation was completed in 2007, and today the building serves as a museum, an active Orthodox synagogue and a National Historic Landmark.  To truly get a sense of the synagogue and the immigrants who once worshiped there, I highly recommend a visit and guided tour–free on Mondays! On a sunny day, the illumination of the sanctuary is spectacular. 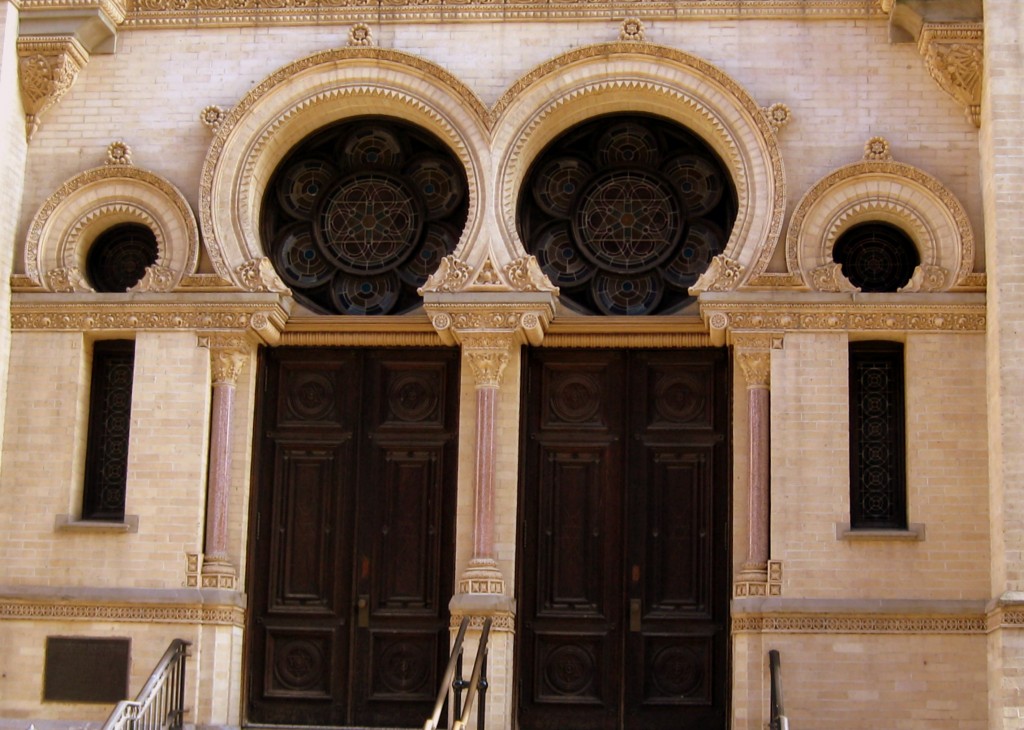 Last week, I had the pleasure of visiting the New York Transit Museum for the first time.  Well the first time since I was old enough to care about anything more than sitting in the driver’s seat of the buses.  Located in the old Court Street station of the little-used Independent subway system, this lesser-known Brooklyn museum is fascinating for kids and adults alike.  However, it doesn’t have the mass appeal of the Met or even the Museum of the City of New York.  This museum is best for anyone with an interest in New York’s public transit system or kids who find buses and trains fascinating—so basically all kids.  Having been a Geology major in college, one of the exhibits I enjoyed the most was about the bedrock of Manhattan and the various struggles encountered while tunneling through it.

Here are some interesting facts I learned:

Don’t miss their collection of old trains on display and the old ads and subway maps inside them.  And just because I’m older, doesn’t mean I can’t still drive the buses! 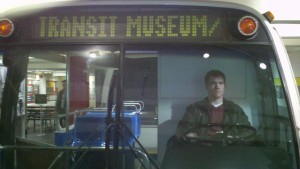